Some slept during the day and walked the street by night, others went out during the day using the disguise of wigs to avoid being caught. They read, wrote, thought about their stand, attended meetings, organised and talked to others about Conscription and the Vietnam War.

They hid in plain sight with the idea that they would circulate as widely as possible in the community, to be in one sense as visible as possible, but not to get arrested. 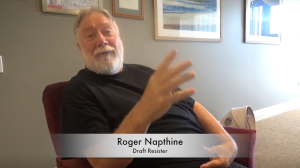 Roger moved from house to house, receiving a call with the message’ get boots tonight’. Then the car arrived and he was whisked away. Laying on the back seat with a blanket over him, to yet another safe house. If there were unknown cars outside of that house then he would not be delivered. Tony stayed with several people for short periods, and with one family for ten months, moving out after the Police had pulled over car he was travelling back there in after a night out with friends.  It seemed to Tony that the cops were interested in pulling people up but not throwing everything into it. Michael went underground on the 7th October 1970, initially staying with Ian Turner and Paul Fox then at a number of places, sometimes with his partner Fran and sometimes with other Draft Resisters. There were several people who played big roles in providing safe houses which were just arranged and provided. Two of those people were John Ryan from Catholic Workers and Jean McLean from SOS. In late 1971 Bob received a medical notice and was prosecuted for not attending a medical. He was sentenced to 7 days in Pentridge. His birthdate had been pulled from the barrel in 1967 but had been deferred whilst he completed his University degree. Then in March 1972 after receiving a call at work about a Commonwealth Police arrest of an acquaintance Bob went on the ‘run’ staying at many houses, sleeping by day, walking at night and in between attending meetings to spread the word.