Safe House providers were ordinary people connected by their opposition to the Vietnam War and to conscription. They lived throughout Melbourne and country Victoria.

They worked in arrange of jobs as teachers, house painters, at home, on the wharfs, as carpenters, union organisers, in abattoirs and arrange of respectable jobs. They lived in suburbia with neighbours who might have known that they were hosting a Draft Resister, or might not have.

They provided a safe house, food and company. On occasions the hosts took them to the football and to a building job. The Draft Resisters assisted one family with the annual sauce making another helped cut down a tree in the host’s back yard.

Security was an issue and some hosts went to lengths to hide their guests whilst others took risks which worked. No-one was ever ‘dobbed’ in by a neighbour, friend or relative of the host.

Most of the potential safe house contacts were made through a network of those ordinary people. They were approached in a school ground, at a meeting, in workplaces, and sometimes, although carefully as it was widely believed that they were tapped, by phone.

The Drivers then went to work, delivering, collecting and moving around the Draft Resister to the next and a new house. Many stays were short, some were up to twelve months. 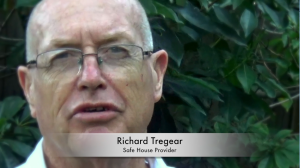 Richards family had a Draft Resister stay at their home for a short time, but fearing that the Police could raid Richard moved him to a cabin on land at Blackwood where he stayed for several months. Richard registered for the draft but his birthdate was not drawn out. With a handwritten lists of drivers and safe houses  which were scattered all over Melbourne Joan’s  main job  was ferrying the Draft Resisters to and fro. She did have one stay with her family for a short time risky because she was a high-profile activist and, living in a neighbourhood where most people supported the war, they could have been ‘dobbed in’.   A founding member of Save our Sons, Joan was also one of the Fairlea Five, sentenced to fourteen days in Fairlea Prison at Easter 1972. Fran was the partner of Michael Hamel-Green and spent much time travelling to where he was staying. A cat and mouse journey, sometimes in costume so that she would not be caught or lead the Police to Michael. Ann and Giovanni lived with their children in Coburg. Giovanni was working as a house painter and Ann was at home with the children. They did not hesitate to take in a Draft Resister although Ann cannot remember who asked them but being active in the anti-conscription and the anti-vietnam campaigns they would have been known and been known to be sympathetic.

Mary Doyle is an historian and activist. She, with partner Val Noone, set up an open house which included homeless people and draft resisters in Fitzroy in late 1971. Together they made the feature of preparing an evening meal to which everybody was invited. 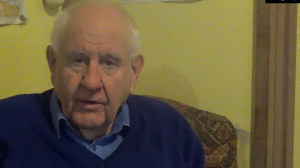 Dr Val Noone is an historian who has written extensively on social and Labor history, who with his partner Mary Doyle, provided a safe house for several Vietnam War Draft Resisters.

Small in numbers but critical in the task at hand. They drove the Draft resisters from one safe house to the next, often in the dead of night. The common theme was to lie on the back seat covered by a blanket. Not all did and Kevin Healy’s Police chase with Bob Scates on board, not covered by a blanket, ended with Bobs arrest.

We recruited safe houses by just asking people at meetings. We knew that they would likely say yes as they were party members or supporters. There were no dramas, no problems, people that were asked to provide a safe house knew what it entailed and what was expected of them. My job was to drive the Draft Resisters to the safe houses and in April 1972 the Police did catch me with Bob Scates on board.