Helen Robertson was born in Scotland to Joseph Biggs and Elizabeth nee Baird and the family arrived in Victoria in 1853.

Helen began work at aged fourteen as a clothing machinist at a rate of ten to twelve shillings sixpence per week. That was about half the rate for unskilled male labourers. In 1870 Helen married James Robertson also Scottish born and with children “probably combined home duties with outwork, the endemic, lowest paid form of employment in the garment industry”.

Involvement in trade unions began possibly as early as 1874 before she campaigned, and led in 1880, local Tailoresses in a campaign against oppressive works practices in the industry which were commonly known as ‘sweating’. In the same year she, and others, formed the Tailoresses Association with little success against employers and other workers who feared being blacklisted.

Later, the group led by Helen, managed to hold a meeting and then approached the Trades Hall Council which was initially reluctant to support them.

Continued publicity in other industries, printing and retail, a Royal Commission was set up in 1882 with the working conditions becoming well known.  Public sympathy followed along with support from The Age and reforming public figures.  With this support Helen and her colleagues and with the sponsorship of the Tailors Union, met with The Trades Hall Council to protest at wage cuts in one particular factory. The Trades Hall Council, keen to expand its influence in the industry established the Tailoresses Union, commencing on December 11th 1882. The union was comprised of a male Executive with a committee of seven women, one of whom was Helen.

Public support for the women by this time was so evident that The Age raised a thousand pounds in the first week of an appeal and Trades Hall negotiated a raft of claims, most of which were accepted by protectionist employers in early 1883.

In 1885 The Factory Act was proclaimed and there were some improvements in working conditions, despite amendments by the Legislative Council.

The Trades Hall Council then agreed to the construction of a Female Operatives Hall which stood behind the Main building fronting Lygon St. Helen became a member of the Foundation Committee and in 1894 a member of the Eight Hours Committee.

In 1896 the union obtained their first Wages Board but after a collapse of the economy led to a downturn in the clothing trade such that union membership dropped dramatically the Tailoresses Union merged eventually in 1906 with the Tailors Society. That eventually became the Federated Clothing Trades Union and Helen continued her membership serving a time as Vice- President.

Mr. B. DOUGLASS, who occupied the chair opened the meeting by referring to the general sympathy that had been evinced with the movement, and urging the girls to remain firm in demanding right and justice from their employers.

Mr. W. E. MURPHY, in a lengthy speech, advocated the formation of a tailoresses’ union. Such a body would protect their rights in the future and insist on a proper and satisfactory rate of wages. Overtures had been made on behalf of Messrs. Beath, Schiess, and Co. that they should return to work at the former rate of wages but he would ask them whether they would return on such terms? (Cries of “No, no”.)

Mr. R. TOWART, secretary of the Salesmen’s Union, advised the girls to ignore all outside influence and be guided by the Trades-hall Committee. A letter had appeared in The Argus of that day inquiring why the body he represented had the audacity to take up the cause of the factory girls. The answer to that was because they felt for them as sisters and were resolved to aid them in their present difficulty. (Applause) He hoped by their firm and united action they would make this the first and the last strike in Victoria.

On the motion of Miss CRESWELL, seconded by Miss CASS, it was unanimously re-

“That we form ourselves into a Tailoresses’ Union for mutual benefit and protection.”

“That a sub-committee be appointed to act in con-junction with the Trades-hall committee in carrying out the previous resolution.”

This motion was also carried unanimously, and the following were selected as a

Mr. McIvor, of Messrs McIvor and Lincoln, then delivered an exciting address in which he advised the tailoresses of every factory in the city to strike at once. This advice was received with prolonged applause.

No single factory of itself, he said, could hope to succeed in such a contest. It was only by combined effort that they could hope to obtain their rights.

The CHAIRMAN stated that the girls need have no fear whilst out on strike. Their cause was in good hands. A large sum of money was in the hands of the Trades-hall committee for their benefit. That day the men of the Williamstown and Sandridge workshops had forwarded £40 in aid of the cause. He also had to acknowledge a number of private donations.

A vote of thanks to the chairman terminated the meeting.

At the conclusion of the business the Trades-hall committee and the representatives of the tailoresses met in conference and discussed the situation. 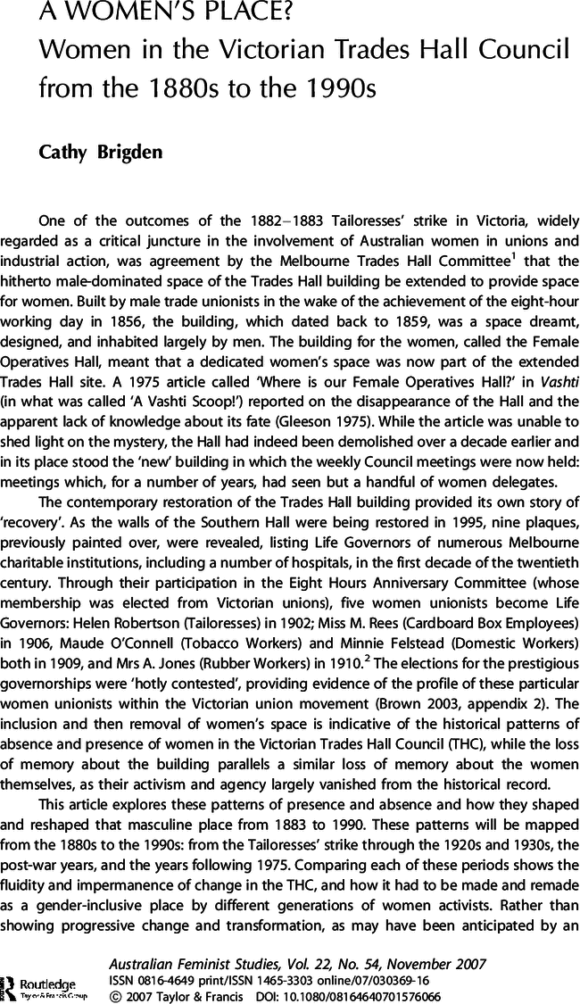