I think possibly there were a number of servicemen who thought that we were traitors or something like that. Save Our Sons played a key role in developing a network of safe houses that we could go to. There was one occasion when I was staying in a rented house and the estate agent rang up to say the Commonwealth Police thought that there were draft resisters in the house. So he tipped us off. Everywhere in the community there was a tremendous amount of support.

Bob Scates lived at the DMZ Poster Shop at 574a Chapel St, South Yarra, for a while in 1971.  It was set up as a cooperative in May 1971.  Most of the Board members were also members of the Draft Resisters Union.  It was staffed by Mike’s (Michael Hamel Green) mum, Gail Fahey and Fran’s mum, Evelyn Newell.

Not sure if it was an offence to provide a Safe House. Perhaps it was. I certainly didn’t want to endanger other people. As it got closer to the election it felt like the cops wouldn’t arrest us.

Last month in 1972 before the election we got lax with our security however the Police must have been told to go easy perhaps because they didn’t want arrests before the election. The Police needed the co-operation from the public and they were not getting it. People might have known where we were staying but wouldn’t take action and report us.

Some of the Draft Resisters had been underground for about eighteen months by the time of the 1972 federal election and were anxious to get on with living or to go to gaol if the Libs won. I am not sure what I would have done. 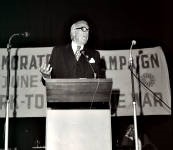 They led a national campaign from Moorabbin and the Draft Registers Union operated from a Highett Post Office box number, just seven boxes away from its arch enemy, the Australian Nazi Party which also operated out of Highett.

Barry won ALP re-selection to oppose Don Chipp in the seat of Hotham at the 1966 federal election while being represented by a vacant chair on the stage of Moorabbin Town Hall. He was “on the run” for draft resistance.

In the early years registration forms were available at the counter in all Post Offices, however after being found to be misused they were moved to behind the counter

Barry Johnson had registered his father’s two ferrets, Simon and George, for military service. The government sent the ferrets call-up notices, which got more than a few laughs at the time.

As we go to press the police are still searching for Mr. Laurie Carmichael. To thousands of Australian students he is emerging as another hero. If the Federal Government finds, as well it may, that the mounting student campaign against the National Service Act develops into uncontrollable flood proportions, it will have only itself to blame. It is now starting to pay the price of short sightedness on the Vietnam issue, of having failed to press for a win policy and of rallying the Australian people to back that policy.

Peter and I were both arrested for handing out anti conscription pamphlets. We were fined but didn’t pay the fine. When Whitlam came into power he cleared us of those charges.

A house at Rosebud was a popular safe house. If anyone knew who owned it they have long forgotten. Several Draft Resisters stayed there, sometimes as a group. They remember it being safe and easy as they could get out in the sun, play cricket on the beach in the morning and then write leaflets in the afternoon.

A safe house in Highett was identified as belonging to the Mitchell family. The daughter remembers as an eight year old giving up her bed for a Draft Resister and that there was always sleeping bags on the lounge floor.

The envelope of Joseph Erftemeyer’s letter to Bob Scates

Joe Erftemeyer wrote to his friend Bob Scates in Pentridge Prison in October 1972 for failing to register for national service.

They were both members of the Draft Resisters Union whose membership was open to those who refused to comply with the National Service Act as well as those who intended not to comply.